If you’ve worked with Elixir for the last couple of years, you might be familiar with OTP releases, what they are and how to generate them using libraries or tools such as Distillery. Since Elixir version 1.9, releases are now part of the core language and in this post, we’ll explore how to create one inside a Docker container using multi-staged builds.

First lets remember what an OTP release is, from the Erlang docs:

When you have written one or more applications, you might want to create a complete system with these applications and a subset of the Erlang/OTP applications. This is called a release.

So, a release is a single or multiple OTP applications packed as a standalone system which is ready for distribution. On top of that, you can also bundle the Erlang Runtime System (ERTS) so your release can run on a target machine without the need of an Erlang or Elixir installation.

When you create a release, you should take into account that it must be build in a machine that matches the target machine. This means that if I build the release on a Linux machine it won’t be able to run on a machine with Mac OS or Windows.

What are the benefits of producing an OTP release instead of running your code in production mode on a server? These are some of them:

In order to showcase Elixir’s releases, first we need to create an application we can work with. I’m assuming you already have Elixir >= 1.9 and Docker installed and running in your machine.

Let’s install the latest Phoenix version (1.4.11 at the time of this writing):

Now lets create the project, on the path of your preference run:

Select “Y” when prompted to install dependencies, and then type the following.

If everything goes well, you can visit http://localhost:4000 in your browser and you’ll find the Phoenix homepage: 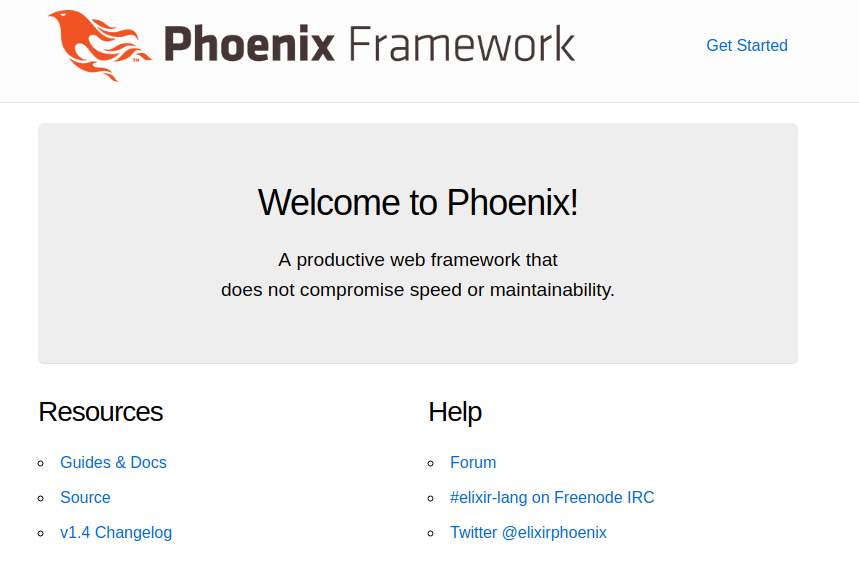 Now it’s time to create the release, on the application path run:

This will generate some files in the rel folder (more on these later). Now we should configure our release, to do this, create a config/releases.exs file, this file an path is the default and will include its own runtime configuration. Add the following to this file:

The configuration provided in this file should be available at runtime (when you run the release), unlike configuration found in config/dev.exs, config/test.exs, config/prod.exs files, which is evaluated at build-time (when you build the release). As you can see, first we declare some variables by calling System.fetch_env! function. This function will fetch the given environment variable or will rise an error if it can’t be found and our release won’t be able to start.

Notice how we also added the server: true option to our ExreleaseWeb.Endpoint configuration, this to instruct Phoenix to start our endpoint.

Since we’ll be fetching our configuration and secrets from this file, you can safely delete the config/prod.secret.exs file, and remove the following line from config/prod.exs:

Its important to understand that we are still using the config/prod.exs file to configure build-time options like ExreleaseWeb.Endpoint and other dependencies for production.

To generate the first release and serve it, go to the project’s path and run the following in your terminal:

The first command will prepare your CSS, JavaScript and other assets for production. The second one will create a release for the prod environment, if you go to the _build/prod folder, you’ll notice it contains a rel folder inside: this is where our release lives. The third and last command, is setting our runtime environment variables, notice that here we are generating the secret key by running the Phoenix generator mix phx.gen.secret, and then we start the release. If you go to http://localhost:4000 you should see the same Phoenix landing page, this time served completely by our release.

Lets make a quick parentheses here, I’ve you’ve been working with Elixir for some time you might have noticed some libraries or apps use Module attributes as constants. Lets look at an example:

Do you notice why this wont work with our release? Exactly! Module attributes are set at compilation time, but since our environment variable is set at runtime it doesn’t yet exist when we generate the release, so this approach won’t work for us.

What can we do instead? Fortunately it’s easy to solve it by generating a private function that will return the same constant from configuration:

Now that we’re aware of this, we shouldn’t have any issues.

To build the real release we’re going to user Docker, since we’re interested in running our containerized application in a cluster of Linux machines. We’ll use a multi-stage Dockerfile.

Add a Dockerfile to the root of the project and copy the following:

The first stage will be the builder stage, here we install Elixir from the official image, at the time of this writing the latest is elixir:1.9.4, then we provide some steps to follow, you can get a grasp of whats going on from the comments before each section.

After the build stage, we need to create the application container, the next stage will do so. The new stage will be based on Debian (the official Elixir image is too), because we have the Erlang Runtime System (ERTS) bundled in the release, we don’t need Erlang or Elixir anymore in this step. This will allow us to have a much smaller image size.

Notice that we also installed postgresql-client, a lib needed by postgrex, so if you intend to use Ecto, you’ll probably need it.

We should probably add a .dockerignore file too:

With our new Dockerfile, go ahead and build the application image by running the following from the project’s path:

If everything goes well and you run docker images you should see something similar to this:

As you can see the elixir image is over 1 GB while our application image exrelease is about 140 MB in size. That’s a big win from my point of view.

Now, lets launch our new container, in your terminal run:

If you visit http://localhost:4000 you should see once again the Phoenix home page, our containerized release is working!

If you previously worked with Distillery you might remember it provided a “boot hook”, a feature that allowed to execute commands or run some code when the app started (eg. run Ecto migrations). Since we’re using mix release now, we should change the way to accomplish this.

Remember that running mix release.init created some files in the rel folder? Well, one of these is going to be helpful. rel/env.sh.eex will run whenever our release starts, here we can call the commands we need.

For now lets asume we have Ecto in our dependencies, some migrations to run, and a helper module that provides our release tasks:

In order to run this functions, we should modify the rel/env.sh.eex file, at the end of it add:

As you can see, we’re using eval when the release is started with the start command, if you look at the final line of our Dockerfile thats what we’re doing. We’re passing Exrelease.ReleaseTasks.migrate() to eval, and by doing that the migrate/0 function will be called everytime our release is started.

Beware, this won’t work until we add ecto_sql to our dependencies, once we do that, configure Ecto and rebuild our image, we will see the IO lines from the ReleaseTasks module printed on our terminal when we start the application.

The rel/env.bat.eex is used when generating a release for Windows, and the rel/vm.args.eex is used to provide any desired configuration VM flags passed to the BEAM. For more information check: mix release docs.

With Elixir 1.9, we are now able to build releases without the addition of any external dependencies, which in my opinion is a good thing since it creates a standard way to do it. Something I really enjoy is how simple it’s to set build-time vs runtime configuration and variables. All this plus the help of Docker to create lightweight containers and an friendly way to run start up scripts makes application distribution much easier than it used to be.

I just want to thank all the amazing people who put their time and effort to provide this amazing tools. Hope you find this post helpful, and as always, if you have any observation or comment you’re welcome to leave it below.